CASE STUDIES / Mould Assessment During Reno of an Arena

MOULD ASSESSMENT DURING RENO OF AN ARENA

When removing mould from a public building, it is essential that the abatement work is carried out safely and effectively to protect the workers as well as the public. We’ve done this type of mould inspection and monitoring work in government buildings, office buildings, and private homes thousands of times since 2010.

This is why, when an assessment of a municipal hockey arena in Ontario identified mould in wall and ceiling finishes in multiple locations, we were retained to provide inspection and air monitoring before, during, and after remediation.

Onsite and ongoing project management allowed us to recommend changes to the scope when additional mould-impacted areas were discovered.

Adding to the complexity of our client’s problem, some asbestos-containing materials were found to be impacted by mould growth.

The goal of the project was to remove all mould-impacted materials. Where mould growth had entered asbestos-containing drywall ceiling finishes, asbestos abatement measures and procedures took precedence. As there are no definitive regulatory limits for acceptable exposure levels to moulds, we followed industry guidelines such as those of the Canadian Construction Association.

Asbestos air sampling followed by phase contrast microscopy during the initial stages of demolition allowed us to show that the airborne fibre concentrations were well within the regulated exposure threshold.

We collected non-viable spore trap air samples and sent them to a lab for microscopic analysis during remediation work and after abatement. In both cases the samples demonstrated that mould spore concentrations were qualitatively and quantitatively acceptable according to industry standards.

As part of our report, we recommended that the single most effective way to prevent mould contamination in future would be the prompt removal of any suspected contaminated material and repair of the structural components of the building and mechanical failures that lead to the propagation. In all situations, the underlying cause of water accumulation must be rectified or the problem will recur. 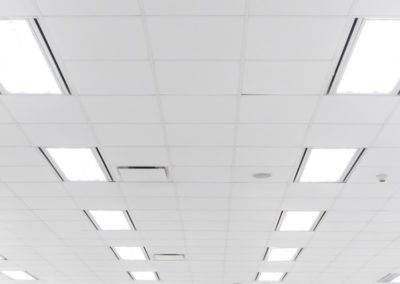 He has been an environmental consultant for more than 19 years with extensive training experience across Canada.